Over 20 first-graders and their parents walked down the steps of American Airlines Center in utter awe. They were the first ones through the doors, treated to a VIP experience that played out like a movie for the kids.

For weeks, the students researched Jalen Brunson for African American Heritage Month, and now their real-life superhero stood before them.

“Jalen, we love you!” several of the youngsters shouted as they held up colorful posters of Brunson intricately etched on the page with good luck messages.

Each year, the Dallas Mavericks host many children and groups throughout the season, but what made this event incredibly unique was that everything happened organically.

A first grade dual language teacher named Leticia Lazo from Sigler Elementary School in Plano decided to choose a North Texas athlete for her students to research for African American Heritage Month. Instead of just studying historical figures in books, Lazo picked someone locally who is making a difference beyond just the game.

The class selected Brunson, and for three weeks the kids learned everything possible about the Villanova product, from where he grew up, his family to his collegiate career and rise to the NBA.

“After seeing how much the students look up to Jalen, I decided to tweet pictures of our project to him,” said Lazo, a native of Monterrey, Mexico, who has taught for over 25 years.

The teacher could have never predicted that a divine meeting was about to take place. Sandra Brunson, who is Jalen Brunson’s mother and wife to longtime NBA veteran Rick Brunson, happened to see that very tweet.

Her family has been a part of the NBA for nearly two decades, so they’ve met people along the way who just stand above the rest. Mrs. Lazo’s tweet caught the family’s attention.

“I was so moved to see how pure and innocent their hard work was because it had nothing to do with the game,” Sandra Brunson said. “It didn’t have to do with how many points Jalen did or didn’t score, and that was so refreshing that someone else was learning more about him beyond just the actual game.”

Of course, Lazo had no idea that her willingness to show off her students’ hard work on Twitter would lead to something greater.

“My students would ask if Jalen had seen the tweet and liked it,” she said. “Then, one day, I got a phone call from Sandra Brunson, and the rest is history.”

Although there are thousands of students across the region, Sandra and Jalen Brunson were captivated by Mrs. Lazo’s desire to bring Black History studies to life.

Sandra visited the classroom a short time later, and Jalen hosted a Zoom call, delivering pizza for the special moment. The family then decided to take it further and invited Mrs. Lazo, plus the entire classroom and their parents, to Sunday night’s Dallas Mavericks game.

The game was heartwarming from start to finish. The children and their parents were giddy with excitement and relished in the pageantry of the game, and they received early entry to watch the Mavs warm up before the doors ever opened.

The families also received many other surprises.

Representatives from mega supermarket chain Kroger, a longtime community supporter of the Dallas Mavericks, heard about the special night and quickly put together goodie bags for all the families.

Kroger also donated $100 gift cards to each student, plus added snacks, and a durable cooler to keep everything fresh.

The kids also received food vouchers at the game, and Brunson signed mini basketballs for all the students. He even stopped over to visit with the children before the game.

“This memory will be a part of their lives forever,” Lazo shared. “I’m just so thankful for the opportunity to have them here to meet Jalen and to live their dream. It makes it very real because we researched him for weeks, and now we are here to watch him play. It’s just amazing.”

Several of the parents we spoke with explained how just attending the game was a remarkable gift for their child. For weeks, the students went home with enthusiasm and eagerness and talked about this basketball player named Jalen Brunson. Some parents shared that it would be financially impossible for them to attend a game without the free tickets. Now to see Jalen standing in front of the youth was a dream.

“My first graders quickly became fascinated with him and his life so much,” Lazo said.

They’ve also developed a new love for the game and went from playing tag and soccer during recess to shooting hoops. Colorful handmade artwork of Brunson is also displayed in the classroom and the halls.

“Every drawing they make is him,” Lazo added with a big smile.

Jalen Brunson is one of the most philanthropic players in the NBA, and each year he returns home to host basketball camps with his family. They donate funds to help local families and contribute to countless other initiatives throughout the year. Brunson also awards scholarships to students each year, and he also participates in numerous community events and camps with the Mavs. Last week, the Mavericks nominated him for the March NBA Cares Community Assist Award.

“These last four years, I have been embraced by this Dallas community and couldn’t be more thankful,” Brunson said. “We have a great fanbase who loves this sport, and it’s been an honor for my family and me.”

Sandra Brunson said she was thrilled to help her son serve and honor a local educator and her students.

“What stood out to me about Mrs. Lazo is her authenticity and how much she cares about the children,” Sandra Brunson said. “She’s very intentional about details, especially in her classroom. I also respect how she used someone like Jalen, who is living and current now, as an example for African American Heritage Month instead of just reading about someone in the history books. It was really moving to see how she meshed that all together in a learning experience for them.”

Sunday night was special in countless ways, and the students were good luck charms for Jalen, who recorded another outstanding performance with 18 points, including three 3-pointers, plus six rebounds and five assists.

The Mavericks cruised to 130-120 victory against San Antonio thanks to the Sigler Stars in Section 124.

As the Mavs move towards the playoffs, the team can rejoice because a small — but mighty — group of first-graders will be cheering them on from a classroom at Sigler Elementary.

And, perhaps, the next Jalen Brunson is among them.

“We are so gracious that we get to recognize the children and who they aspire to be,” Sandra Brunson said. “There are hundreds of thousands of kids here in Dallas across the school districts, but it starts somewhere. This was our chance to say ‘we see you,’ and I’m just so thankful that Jalen allowed me to be the vessel to communicate that to Mrs. Lazo and her students. Everyone put this together so quickly, and it’s just a blessing.” 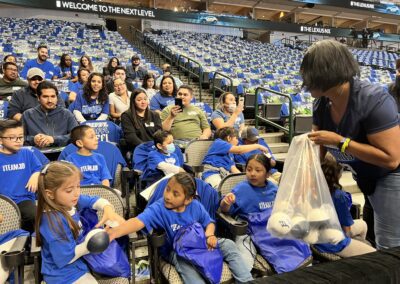 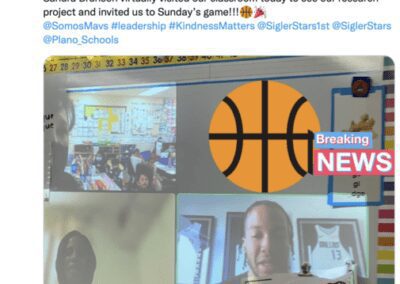 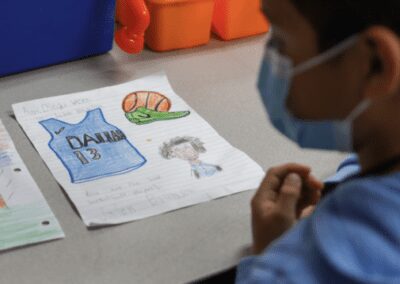 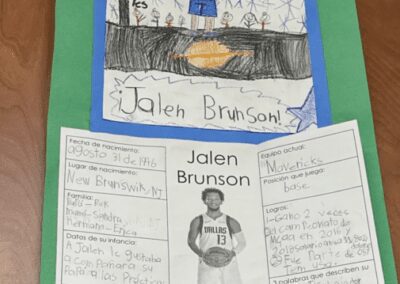 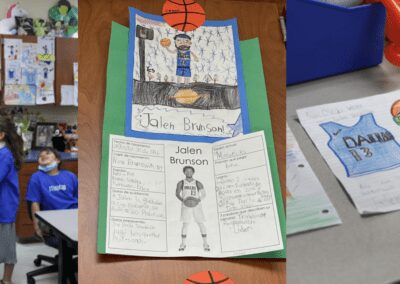 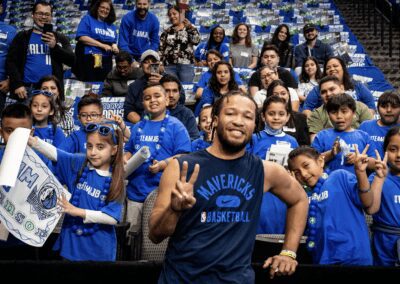 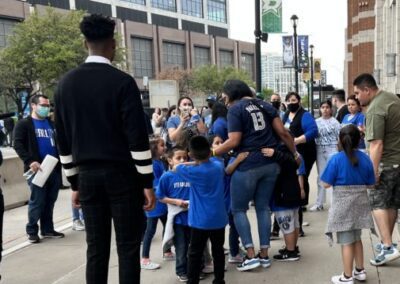 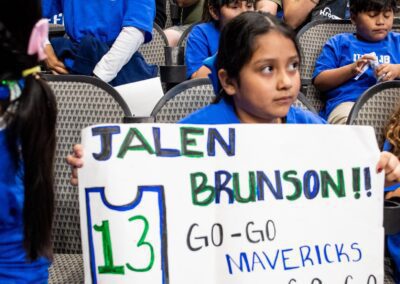 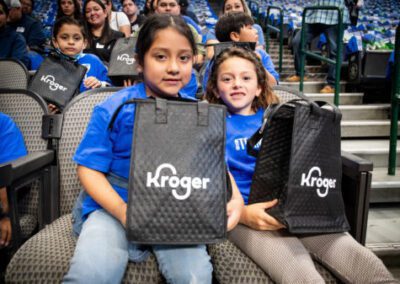 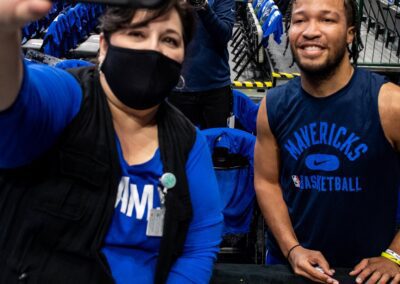 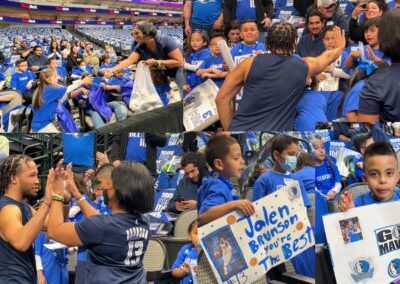 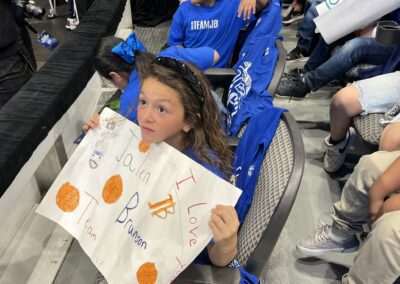 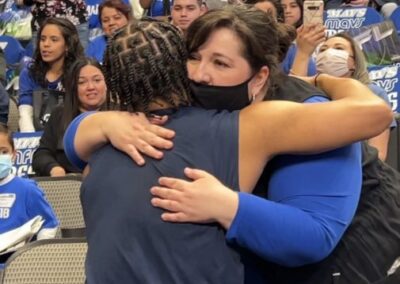 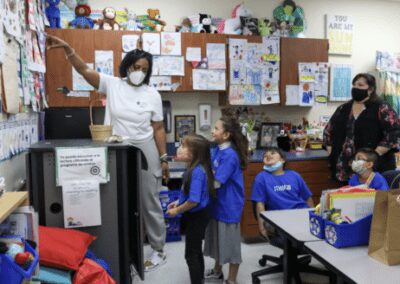 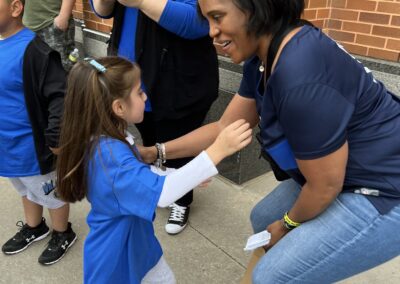 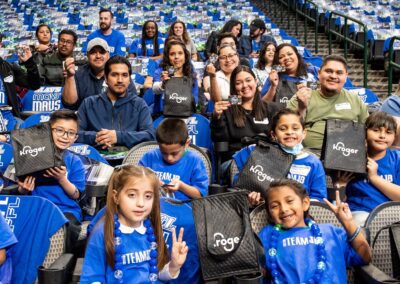 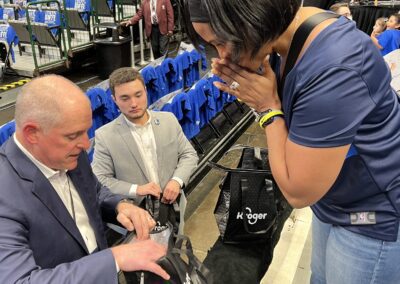 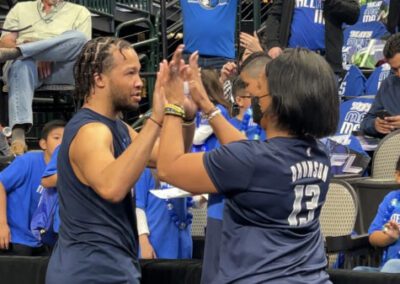 Paw-fect Day: Jalen Brunson kept his word to have a doggy play-date with this little Knicks fan

Congratulations to the 2022 recipients of the Jalen Brunson Patriot Pride Scholarship and the Nathan Halterman Memorial Scholarship!

The Pursuit of Consistency: How Jalen Brunson Has Emerged into a Prominent Force for the Dallas Mavericks